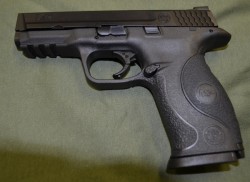 The Smith & Wesson M&P (Military & Police) series is the latest evolution of the company’s Sigma series of polymer-framed pistols. The name of the series is to give homage to the company’s earlier offerings of the M&P revolver from the early 20th century. The M&P series is rapidly being adopted by numerous police agencies in […]