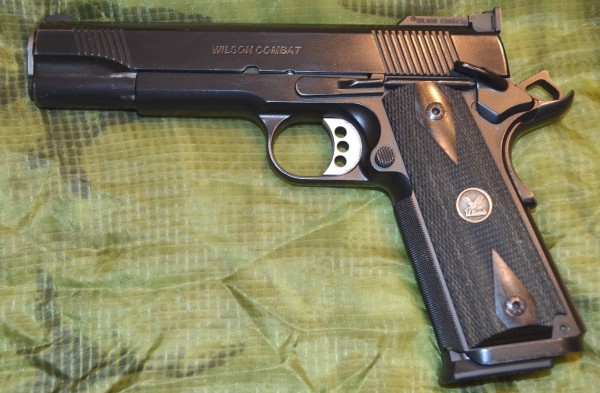 The M1911 pistol design has been around for 102 years. It is a proven design that has seen service with the armed forces of as many as 75 different countries and has been in the US Military’s arsenal since its inception. At least 40 companies produce a version of the M1911 pistol. In this review we will look at one of the best: the Wilson Combat CQB.

The CQB is a custom built handgun, all components are fitted by hand and test fired. When the pistol arrives, it comes with a build sheet several pages in length, identifying which gunsmith worked on the gun, what parts were installed, etc. This particular model features an ambidextrous safety, match grade barrel, 30 lpi (lines per inch) checkering on the front strap, Bo-Mar style night sights and a 3.5 lb trigger weight. The grips were hardwood with double diamond checkering and Wilson Combat medallions and the finish was Wilson’s proprietary Armor-Tuff coating.

Wilson Combat guarantees a shooting accuracy of a 1” group at 25 yards with the pistol. For a suggested retail price approaching $3000, it should deliver on that promise. A test session was conducted at 50 feet, well within the 25 yard parameter and 4 types of ammunition were used: Remington Golden Sabre 185 grain JHP (+P load), Federal Premium 230 Grain FMJ, Winchester 230 Grain FMJ and CCI Lawman 200 Grain JHP.  As per the specs, group size was minimal.

This is one pistol that performs as advertised.