There are many variations on these rules, but here’s what I think is the easiest way to remember them:

These may seem basic, but here’s an example of how easily one can be broken…

Whenever I take a gun-novice friend to my local shooting range for the first time, I pound the 4 rules into their head before we ever get anywhere near the range – making them repeat each one multiple times – to the point where they yell, “I got it, I got it, enough already!”

Then, at the range, I put the handgun down on the shooting bench. When it’s time for the friend to pick up the gun, they INEVITABLY go to grab it with their finger on the trigger! Rule #3 is broken before they ever pick up the gun!

The other 3 rules are easily broken too. You must focus clearly on everything you are doing and keep all 4 rules in the forefront of your mind when you handle a handgun.

I suggest you download this PDF from the good folks at the  Tennessee Courts System to get up to speed on handgun lingo: http://www.tncourts.gov/sites/default/files/docs/firearmshandout_1.pdf

3. Semiautomatic Pistol vs. Revolver – What Are The Differences/Pluses/Minuses? 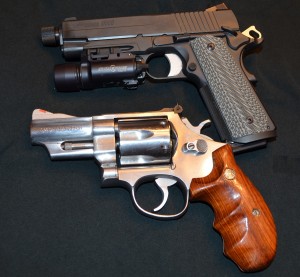 The revolver utilizes a rotating cylinder to store rounds. As the chamber for each cylinder comes in line with the bore and the hammer falls, the firing pin strikes the primer and fires the round. Most revolvers hold 5 or 6 rounds, although some models can hold as many as 10 rounds in the cylinder. Most revolvers are purely mechanical and the action works by the shooter cocking the hammer manually in single action mode or by squeezing the trigger and the action of the trigger cocks and releases the hammer in what is known as double action mode. The strength of the revolver in this regard is reliability.

There are various other strengths and weaknesses to each design. Revolvers tend to be able to fire more powerful cartridges in the magnum category. There are semiautomatic pistols built for these types of cartridges, but they are rare and tend to be bigger (to accommodate the longer case length in the grip) and heavier than revolvers chambered for the same cartridges (due to the higher pressures of these types of rounds).

Revolvers are usually easier for first time shooters to learn how to shoot safely. The recoil for similarly powered cartridges seems to be less and lighter loads can be used, whereas lighter loads in a semiautomatic pistol may not be strong enough to cycle the action and can cause a malfunction. Certain revolvers are easier to conceal as the grip profile is smaller and the barrel can be shorter. This is mostly with regard to a short barreled 5-shot .38 Special revolver as opposed to an 8 inch barreled Magnum revolver.

Semiautomatic pistols have a slightly longer learning curve as most have safeties, decocking levers and other external mechanisms that the shooter must learn as part of the manual of arms. As mentioned previously, capacity is king here, but so is the ability to reload with a spare magazine. In a revolver, the spent casings must be ejected before new rounds can be loaded. This is quicker with modern swing-out cylinders or even top-break models, but single action revolvers must have the cylinder rotated and each casing ejected one at a time. Likewise new rounds must be loaded in this manner.

When it comes to choosing a handgun, particularly for self-protection, the shooter should go with whichever model feels the most comfortable from a learning perspective as well as take into account the intended use. A big, powerful handgun may be great at the range, but its large size and weight might keep it from being a good daily carry gun where you typically need something more lightweight and concealable. Also, if you’re not up to learning about the use and care of a semi-automatic pistol, and don’t want to worry about regularly dis-assembling and cleaning it, you might want to opt for the lower-maintenance revolver.