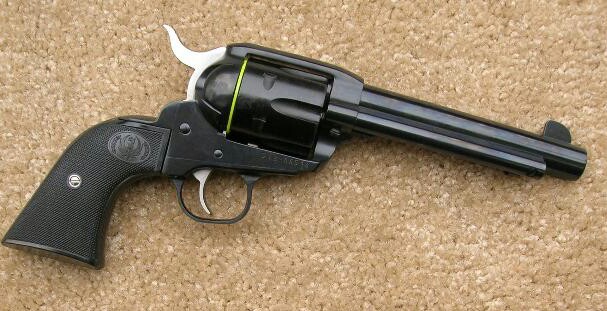 Ruger has been making the Vaquero revolver for decades. The Vaquero is modeled after the traditional Single action army revolver, but made with modern refinements. This model of the New Vaquero is considered a convertible and allows the owner to swap cylinders from 45 colt to 45 acp.

45 Colt ammunition is quite expensive, but gives you the authentic feeling of the legendary Single Action Army. 45 acp is much cheaper and easier to find than .45 Colt. The ability to swap cylinders is incredibly convenient.

The weapons shoots like a dream with 45 Colt ammo it has just the right amount of recoil to be entertaining without being painful, and you can’t beat the big puff of smoke that comes out of the barrel. The 45 acp isn’t as accurate as the 45 Colt due to the jump the 45 acp has to make through the long cylinder, but it’s accurate enough to produce 2 inch groups at 15 yards off hand.

The Vaquero features some great craftsmanship, the cylinder locks up tight and the single action trigger is light and smooth. The weapon’s 4.75 inch barrel produces some great accuracy. The New Vaquero doesn’t require a half cock to load it either, simply open the gate and the cylinder will align and spin freely. This is to address the safety issue associated with half cocking to load.

If you’re an old west enthusiast the New Vaquero is perfect. If you’re simply a gun enthusiast who enjoys shooting and wants an old school flavor the Vaquero is a great choice.