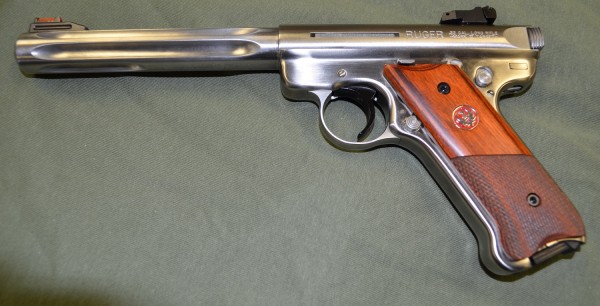 One of the most effective ways to train with a pistol is to shoot it often. Shooting is a deteriorating skill and studies have shown that proficiency can decrease by as much as 40% in as little as one week away from a shooting session. With ammunition prices on the rise, a cost effective method of training can be accomplished by shooting inexpensive 22 lr ammunition. One of the best handguns to supplement centerfire pistol training is the Ruger Mk3.

Introduced in 2004, the Ruger Mk3 represents the latest evolution of Ruger’s target pistol line of handguns. Externally it is similar to the earlier models in shape and size, but incorporates new features including a safety lock and loaded chamber indicator.

One of the best innovations of the Mk3 is the placement of the magazine release near the trigger guard as opposed to on the heel of the frame like its predecessors. This simple change in design allows the shooter to retain crucial muscle memory skills when performing a magazine change as opposed to using a heel type release on a training pistol and a conventional release on a center fire pistol.

We test-fired the Ruger Mk3 with a variety of commercial 22 lr ammunition and the results were impressive. At 25 yards, groups were consistent and within an inch on the target. Moving back to the 50 yard line, performance remained consistent, but a flyer opened this group size up to 1.5 inches.