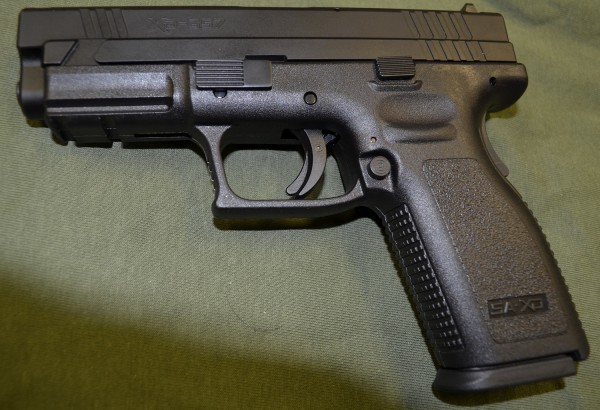 Springfield Armory’s XD series of pistols is based on the polymer framed, striker fired Croatian HS2000 (Hrvatski Samokres). Unlike most modern polymer pistols, the XD incorporates a grip safety similar to that found on the M1911. Another unique component is the full length guide rod. According to the Croatian designers, this mechanism was intended as a “stand-off” device for Close Quarter Combat scenarios. If the muzzle comes in contact with a solid object, the pistol will not go out of battery.

The trigger is a two-stage design, like those found on Glock pistols, but has a smoother overall feel. The XD series incorporates several additional safety features including an internal safety preventing the gun from being fired if a round is not fully chambered. A drop safety prevents the release of the striker, should a sharp blow be struck to the pistol. Several versions incorporate a manual thumb safety.

Shooting the Springfield XD is more enjoyable than most polymer framed pistols as the grip safety aids in creating a lighter and more consistent trigger squeeze as less resistance is needed. The test gun was the XDM variant chambered in 357 SIG. This round may be a bit harder to come by; it is a 40 S&W case necked down to accept a 9mm bullet,

it performs well and shooters can often buy it as a second barrel to use in their existing 40 S&W handgun (or vice versa). The ammunition used was Hornady Critical Defense and groups at 50 feet averaged less than 2 inches.