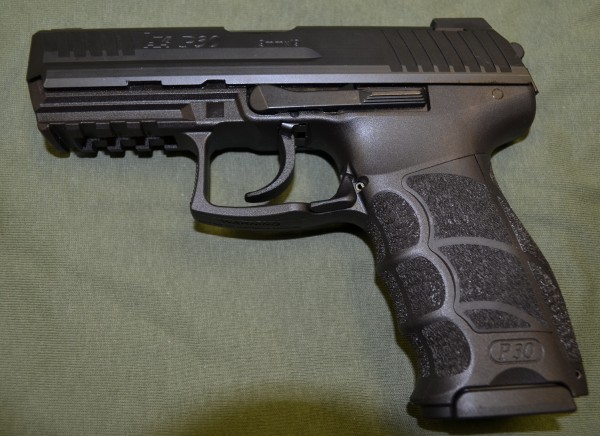 The Heckler & Koch P30-series of pistols was developed by HK as an evolution of the company’s Universal Self-loading Pistol (USP) and its later P2000. The USP was a scaled-down version of the Mk23 pistol designed for US SOCCOM. The USP had a few drawbacks as HK went with a proprietary mounting rail which severely limited the options for mounting lights and lasers. The P30 incorporates a standard rail system instead.

The test model P30 used for this review featured an exposed spurred hammer, but a bobbed hammer is optional. The slide release and magazine release are both ambidextrous to accommodate left-handed shooters. The interchangeable back straps and side panels make this one of the most comfortable feeling pistols in the hand on the market, today.

HK uses three-dot sights which are not tritium, but utilizes a glow in the dark type of epoxy for shooting in low light conditions if the sights are exposed to an external light source for a period of time.

The trigger squeeze is long and the reset seems even longer. Recoil was not noticeable due to the pistol’s full length operating rod which took up most of the recoil instead of transferring it to the polymer frame.