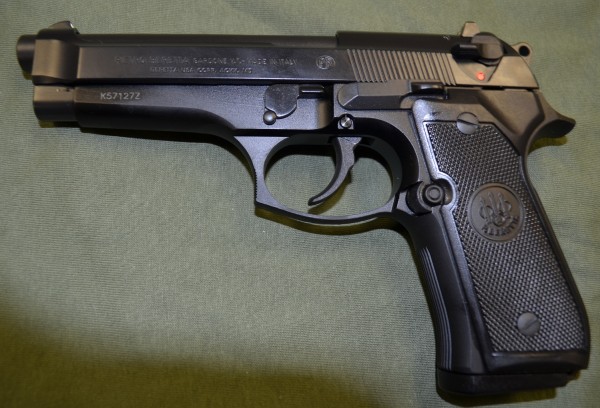 In the late 1970s, the US Military evaluated various pistols chambered in 9mm Parabellum to replace the venerable M1911A1 which was chambered in 45 ACP in order to comply with the NATO standard for handgun caliber to increase capacity from the M1911A1’s 7-rounds. By 1986 the US Military decided on the Beretta M92 and designated it as the M9.

The Beretta M92 weighs in at 41 ounces when loaded with a standard 15-round magazine. This weight absorbs much of the felt recoil. The pistol is double-action, meaning that movement of the trigger cocks the hammer as well as fires the pistol. It has a combination safety and de-cocking lever mounted on the slide. The open top slide aids in the ejection of spent cartridges.

Because it is a double-action pistol, the trigger pull is quite heavy for the first shot from the hammer down position.  It then lightens considerably for subsequent shots.

The Beretta 92 is a great pistol for beginners due to the weight and ease of acquiring a sight picture. The magazine capacity of 15-rounds makes it a suitable choice for home defense or as a duty pistol for law-enforcement. The weight has some drawbacks as does the size for concealed carry.