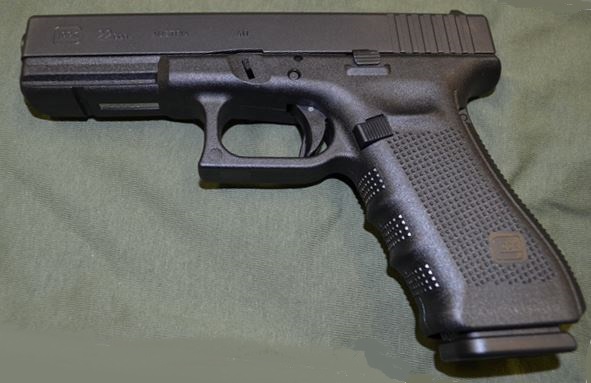 The Glock pistol took the shooting world by storm when it rolled out in 1982. Its polymer frame was a radical idea at the time and lead to misconceptions that the pistol could be smuggled through an airport metal detector (a ridiculous notion as the slide assembly contains over 1 pound of steel). However, the pistols numerous other innovations and its rugged reliability have made it one of the most widely used pistols in law-enforcement use and as a self-defense handgun.

The Glock 22 is a .40 caliber pistol. The pistol is striker-fired and makes use of a unique trigger which acts as the only safety mechanism. There are no external safeties on a Glock and this factor aided police agencies who were transitioning from the revolver as the operation was similar.

Shooting a Glock is slightly different from shooting other semi auto pistols. The polymer frame requires a firm grip and the stock trigger weight is heavier than traditional semiautomatic pistols. These do not tend to be problematic for new shooters, but most experienced pistol shooters will find the transition slightly challenging.

The interchangeable back straps of the fourth generation allow the pistol to be compatible with different sized hands.

The Glock pistol has a host of aftermarket accessories, from triggers to lasers, flashlights, holsters and red dot rear sights. The Glock tends to be a low-maintenance semiautomatic pistol.