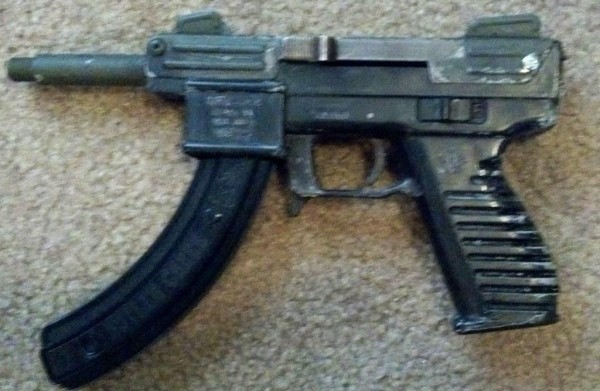 The Tec 22 is made by Intratec, who also designed the gun that made the 90s roar – the Tec 9. The Tec 22 is a .22 caliber semi-automatic pistol that looks like a submachine gun. Throw on a vented barrel extension and this little plinking gun looks downright scary. The Tec 22 uses 10/22 magazines so you have a broad choice of magazines, standard ten rounders, 25 rounders, and even drum magazines.

The little gun is surprisingly accurate, and is more than suitable for informal plinking. The barrel is threaded to accept a suppressor or barrel extension. The magazine is placed forward of the trigger like its big brother, the Tec 9. The rear grip is large, but very comfortable, allowing for a tight, firm grip. The sights are simple but effective.

The magazine release, charging handle, and safety are all ambidextrous. The weapon is predictably easy to control. It’s also lightweight and easy to fire one handed as fast as you can. The weapon is finicky about a few things though. First off is ammo – it needs hotter ammo, like CCI. The weapon also functions much better with steel lip magazines like the BX 25, and it needs to run well oiled. Put all that together and you’ll have a fun day at the range.