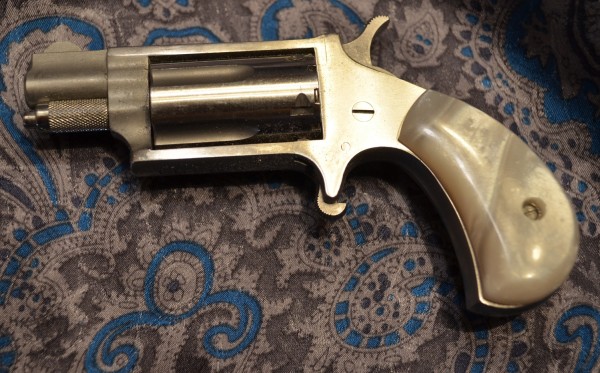 NAA’s revolvers make use of a safety notch machined on the rear of the cylinder to prevent the hammer from resting on a rim of a live round. This proprietary design allows these revolvers to be carried safely and discretely.

Our test revolver was a standard model chambered in 22 Winchester Magnum.  The factory walnut stocks were replaced with grips made from imitation mother of pearl.

The grip is small, the sights are crude and the barrel is short. This precludes serious target shooting at 50 feet, or even at 25 feet. This is a revolver meant for short range, so a target was set up at 10 feet. Hornady Critical Defense ammunition was used as most high velocity ammunition in 22 Magnum will result in unburned powder and the bullet will not properly stabilize in flight. At 10 feet, with this ammunition, the average group size was 4 inches with some shots actually closer at the 2 inch mark.