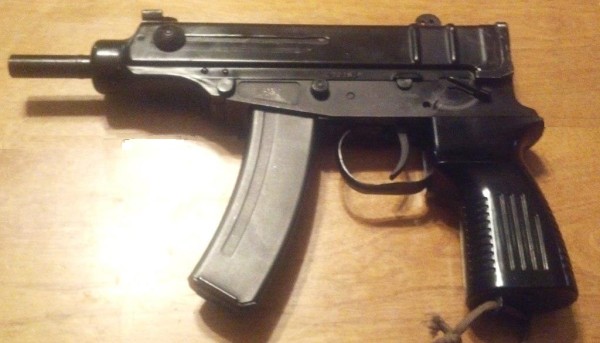 The CZ V61 Skorpion machine pistol was quite the revolutionary idea for its time, introduced in 1961. When the term “personal defense weapon” started being passed around, it described a small submachine gun for truck drivers, tank drivers and non-front line personal.  This was the reason the CZ V61 was brought into service. Currently it is in use with armed forces in various countries as a sidearm.

This model is a semi-automatic-only variant released in the United States. The weapon is chambered in 32 ACP, and feeds from 10 or 20 round box magazines. The weapon ejects from the top and features ambidextrous charging handles. The weapon is very accurate and the sights are quite nice, even with a flip sight, for up to an optimistic 150 meters.  It’s incredibly reliable – this particular gun has not had a jam, failure to feed or failure to fire.

The heavy weight and low powered ammo make this weapon very easy to control. Rapid fire is a breeze. The weapon can’t accept many accessories, but a stock can be added if you complete the necessary ATF paperwork to make this a short barreled rifle. Concealment isn’t really an option for a gun this large, and for the weak 32 round it’s not great for home defense either. This weapon is purely for fun. Shooting tin cans and zombie targets is where this little beast shines.