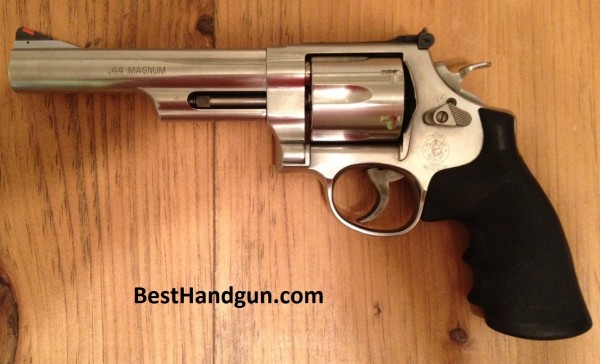 The Smith & Wesson model 629 .44 Magnum is the large “N-frame” revolver from S&W and the  newer version of their older model 29. The 29 was made famous by the Clint Eastwood character, detective “Dirty” Harry Callahan in films back in the 70s and 80s.

That gun in those movies spawned 2 very famous quotes, which the American Film Institute ranks in their top 100 movie quotes of the last 100 years. Both quotes come from Dirty Harry as he points his .44 Magnum at bad guys… “Go ahead, make my day” (#6) and “You’ve got to ask yourself one question: ‘Do I feel lucky?’ Well, do ya, punk?” (#51).

At the time those movies were released, that revolver was arguably “the most powerful handgun in the world” as Dirty Harry liked to mention, but it has since been eclipsed in power by several guns, notably the S&W and Desert Eagle .50 caliber guns.

The 629 comes in a variety of barrel lengths and variations. What you see pictured here is a standard 6” 629. The 629 is chambered for both .44 Magnum ammo and the less-intense .44 Special. This is a heavy, solid, well-made gun. The weight helps to reduce recoil, but…

The Magnum ammo isn’t very pleasant to shoot at the range. Unless your forearm weighs 100 lbs., you’ll probably get your fill after several rounds – it is a powerful load and really packs a wallop. As a character in another movie (Taxi Driver) said, “The Magnum – they use that in Africa for killin’ elephants.” The 629 is indeed used by many hunters for larger game, like deer and even bear.

The .44 Special ammo, on the other hand, is a pleasure to shoot with this gun – very little recoil, which helps the gun maintain excellent accuracy.

The longer-barrel versions are tough to keep as a concealed weapon, but it’s definitely doable with the shorter barrels. In any barrel length, this gun is a very capable home/personal defense weapon. Not to mention, it’s quite easy on the eyes.