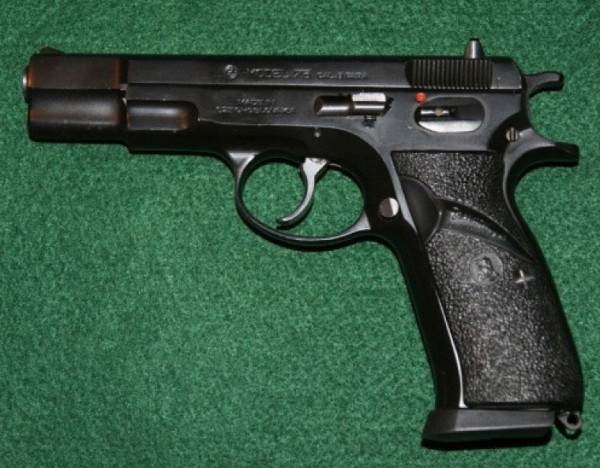 The CZ-75 is a 9mm semi-automatic pistol made by Česká Zbrojovk (CZ) in the Czech Republic. CZ is known for very good quality at reasonable prices. The particular model shown here is known as the Pre-B, because it was made before the second generation CZ-75. CZ later changed the styling of this model gun to include a squared trigger guard, internal safety and a rounded hammer.

This first generation CZ-75 was made in 1987, and was imported into the United States from Europe. It is full size, made of solid steel, and is very heavy. The magazine holds 16 rounds and will shoot whatever is put in the chamber. This gun came equipped with plastic hand grips but these were later replaced with the pictured rubber replacements.

Due to its weight, I would never recommend this gun for conceal carry. I would however, open carry it if able/needed to carry in that fashion. It is very accurate and feels awesome in the hand. This gun has a similar look to the military M-9 used around 1985. This gun is very easy to take down for cleaning and requires no special tools. This vintage gun has many unique features and is no longer produced, hence its unique condition and lack of import markings.

The positives of the CZ-75:

The negatives of the CZ-75:

One Response to CZ-75